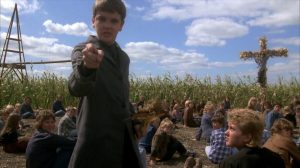 In the 1980s a Stephen King short story was turned into a cult horror flick called “Children of the Corn”.  The film is set in a fictional agricultural town called Gatlin, Nebraska surrounded by huge cornfields. In 1980 there is little left of the town except for the church and everyone has taken on Biblical names. A smart 12-year-old named Isaac gathers all the children into the cornfields and forms them into an religious cult around a make-believe deity and they evolve into a murderous revolution killing all adults as human sacrifices to their cause. They attack and tear down any adult institutions or culture, replacing everything with their childish fantasies of a world run by and for only them.

We see this movie as the perfect allegory for the political movements and rationale of the new Democratic party.  Somehow the “children” have taken over and are pushing aside any semblance of reason and replacing any civilized approach to governance and order with their own “religion” of  cultist, extreme socialism.

In order to propagate their modern version of an old failed Marxism, they have been attacking and destroying any symbol of religion, law and order.  While they feed off the trough of their parents in the form of social programs to survive outside of traditional jobs and taking care of themselves, they continually bite and destroy the hands that feed them…that being taxpayers and “free” government handouts of all types. As wayward children, they believe the world revolves around them and that they are owed anything and everything…for nothing.

These children fictitiously believe that somehow the “corn” always grows to feed them whether they participate in growing it or not.  These kids follow anyone that sounds like they have an ounce of leadership and blindly follow and do their bidding demanding what they want at the sacrifice of everyone else who knows anything or does the work. It is “one for all, and all for one” in a sadistic, irrational world of voodoo thinking economically, politically, and judicially.  They have thrown all traditions and truths out of their minds, replacing them with mantras against any individualistic sovereignty, liberty, or personal freedom. They plan to rule and reign without any realistic plan or concurrence of “adults”.

It is amazing to watch the antics and violence in our streets of Antifa, Black Lives Matter,  and half a dozen other hair-brain groupings of youth that go unchecked by the adults in society. Students and unemployed young people seem to have all the time and resources in the world to tear and burn down our cities “unless” we are willing to release them from all rules of reason. Somehow our governments and military/police enforcers of law and order have  forgotten they are there to squash such childish acting out. The children have infiltrated various positions of governors and mayor-ships to support these bloody and violent rebellions.

Now in the Democratic party you have children running the show.  You have Joe Biden of a childish mind blinded by dementia and thirst for power, but nobody home.  You have Kamala Harris with no real political experience as his heir apparent to the presidency and his spokeswoman. She might as well be a child.

You have AOC, another neophyte who somehow adults let into the room of governance and leadership who has also created a cult-like following around childish gibberish of free healthcare, free education, free universal income, and destroying most of the foundations of our energy and economy.  By the time she is done leading, all you will have left standing is a church for empty prayers of deliverance from such terror and tyranny.

Meanwhile, you have all leading voices of the Democratic party joining the cult mobs of “Black Lives Matter” and Antifa demanding reparations for the “terrible life” they apparently are living in the USA. Since we seem to have an over abundance of these children in our country, it is very possible they will have enough votes to carry society forward into their futuristic apocalypse of lawless socialism and communism…just like the “children of the corn”.  The main question we have is, if that happens, who will know how to grow the corn to survive on?

Let’s hope enough adults will come forward at voting time to control this craziness. If not, you’d better hole up in a church praying for deliverance from the evils coming your way from this Democrat cult of deception.