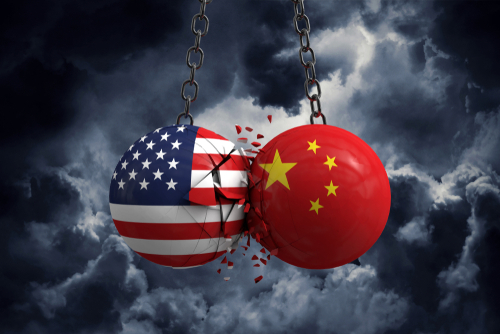 The global trade earthquake brought to us by Donald Trump’s trade wars is just another example of state governance out of control.

While we initially applauded this administration’s pursuits of equalizing the “trade deals” within NAFTA and our biggest trading partner, China…it is now obvious to us that the ego-driven rhetoric by Trump and Co is potentially driving the world to depression such as we haven’t seen in 100 years.

The issue at stake isn’t just about these recent trade negotiation spats and relational “chess playing”, but actually is bringing to light the results of many decades where governments dictated trade and currency values to the world.  In these over-regulated, politically controlled world markets…it doesn’t take much to throw the whole interconnected global economies completely out of whack. That is what we are seeing now in these new trade wars.

The problem with politics is that policies they control economies with change every 4 to 8 years…in much of the world. In totalitarian regimes such as China and Russia, power maintains absolute control much longer. They are able to laugh off temporary power plays such as President Trump’s as a teacher laughs off a grade schooler’s shenanigans when they rebel against “the system”.

The global markets today ARE a system, controlled and regulated by global banks and their minion politicos who always manipulate THEIR system to THEIR advantages. They are usually many steps ahead of temporary power mongerers such as Trump when it comes to determining policy and long term plays. The world at large is in a much better position to survive temporary trade wars and market gymnastics that the USA with its Trillions in debt, increasing civil unrest, consumerist culture, and huge unfunded social obligations of the federal government. The implosion is coming, and everyone but Americans seems to know it.

These trade wars are unwinding decades-long businesses and legal frameworks for those businesses. Big money is positioning to move “on a whim” to safe havens outside of the USA’s tight money and regulatory controls.  We continue moving towards the “Atlas Shrugged” scenario of Ayn Rand’s novel describing what happens when totalitarian socialism overcomes freedom of trade and association both at home and abroad. It is not a pretty story, but it is now becoming reality.

When governments and militarists rule over global trade, it definitely destroys freedom and capitalism. If governments can tell global companies where and when they can do business, there is now absolute corruption. Black markets proliferate.  Honest “law abiders” disintegrate.  Constitutional law has been replaced by executive orders and chaos reigns. Governments control everything.  Laissez-Faire economics is dead. Good luck with that program.