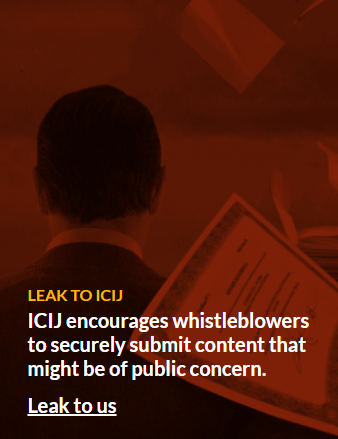 For the past couple years we have been following and writing about the “Panama Papers” campaign spawned and funded by the ICIJ. They have now expanded to the global branding of their cause by calling their campaign “Paradise Papers”…examining the use of small tropical paradise countries to shelter ownership of assets in those tax-advantaged jurisdictions.

As we have been consistent in pointing out, the sole apparent purpose of this journalistic consortium seems to be to attack and expose high net worth companies and individuals for their attempts to protect their investments from overreaching government institutions who want to control movements of capital and attach all wealth to a progressive global tax agenda by global governance.  As governments promise more and more to those they rule over…obviously the wealthy elite is made to be on the hook for all empty promises of these tyrant governments.

Who funds ICIJ remains a bit mysterious.  Yet, the biggest hole in their presupposition is that any successful individual or company that positions their assets for low taxation and privacy (which should be their right) is somehow immoral and worse yet, illegal.

Anyone who understands and believes in individual sovereignty and basic human rights should be very concerned about the machinations of liberal press tied to socialist agendas. The dissemination of misinformation is rampant.  In addition, this organization is guilty of assisting in the illegal dissemination of stolen (hacked) data in Panama, the Bahamas, and elsewhere.  To build investigative reporting on illegally obtained information is to have the pot calling the kettle black.  It is still illegal in most western countries to steal personal information and then slander that person or entity regarding the origins of their funds.

We are not here to support politicos or robber-barons who are on the run with stolen or misappropriated funds that is not theirs.  We support going after people or companies who steal government funds for their personal use. At the same time, most everyone involved with ICIJ cases knows that more than 95% of the people and companies they “out” with STOLEN, private financial information for all the world to see are legal and legitimate holdings.

It is STILL legal in most places to make investments that avoid high taxation.  The USA itself has many programs such as IRA’s, 401ks, and other types of investments that are “tax enhanced” to help people save money for future retirement or emergency needs.  Apparently, when nationals do the same by investing in foreign domiciles are deemed to be tax EVADERs.  Big different between avoidance and evasion of which ICIL and their ilk hold no differentiation and misinform the general public that knows no better or who simply want to attack the rich. This creation of economic warfare between the haves and have-nots is not serving anyone well economically.

It is a core fundamental belief that redistribution of wealth via progressive socialism has never worked in history…and will not work now.  A true system of healthy capitalism is non-existent in the world today. These media pundits continue to misrepresent what true capitalism is or its potential for turning the economic world around in a positive fashion.  They are totally lined up with global socialism…extending “freedom” to mean being free to take from one to give to another at the end of a gun barrel. They are supporters of global totalitarianism which prefers political powers to be in the position of distributing wealth to anyone they see fit even though a majority have not worked or contributed to what they are gaining from these governments.

The world economy has been quietly “controlled” by global banking institutions tied to big government institutions for decades now.  The rush of money into more weapons of mass destruction is just one sign of how dangerous the game has become of controlling money and movement of wealth. When poverty and starvation are evident in countries that spend a majority of their tax revenues on “defense”, you know that the priorities of leadership are totally whacked out.  It is a pure sign that retaining power is much more important than helping the domestic masses.  These governments and banks have no moral high ground over the global wealthy who are trying to find safety and income from their legally obtained assets.  We must teach the world “to fish” versus continually feeding them just enough morsels to keep voting these tyrants into office.

While ICIJ considers themselves modern day “Robin Hoods”, we would suggest the true “Robin Hoods” are those who produce, create jobs and investment opportunities or teach individuals how to be free and self-productive.   The main reason for global poverty and hunger today is not SUPPLY.  The problem is distribution and lack of open markets.  These problems are caused by governments…not the “wealthy elite” everyone wants to blame.

So, we challenge ICIJ to quit hiding behind progressive liberal governments who desire more controls and powers of redistribution and instead jump on the side of the wealth-producing organizations who truly want to share and help society…but not at the end of a gun barrel.