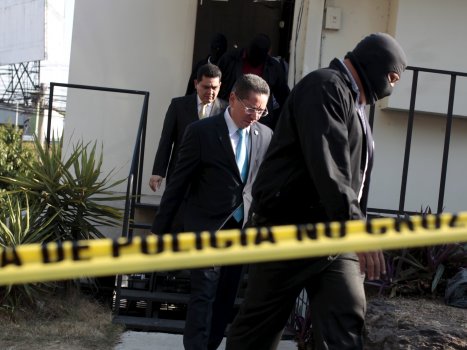 Jurgen Mossack and Luis Fonseca, the founding partners of Panama law firm “Mossack & Fonseca”,  have been arrested over the weekend in preventive detention while charges are processed against them regarding an international probe centered on Brazilian state-run oil company Petrobras. This is totally separate from actions taken against their firm related to the “Panama Papers” debacle or the additional legal processes against Brazils construction conglomerate, Oldebrecht.

We are quite sure that these actions are being orchestrated by international forces at very high levels and it is surprising that this latest case is what they are being held to account for. It also could have a lot to do with power struggles within Panama itself between the sitting President Verela and Luis Fonseca, former legal representative of the President. They have recently accused each other of taking money from Oldebrecht and as we have documented for months now…they have all been very quiet lately regarding the Panama Papers ordeal and the Oldebrecht scandal.

While Panama has been no stranger to corruption and scandal within the various governments we have observed the last number of years, this level of finger pointing and internal strife is unprecedented and could bring considerable unraveling to Panama’s growth and modernization of the past 15 years.

This obviously reveals that the courts and legal system in Panama are now the main “pawns” in the game of ruling on both domestic and international issues.  Since these courts are basically appointed by the current President, one has to give the advantage to the President and his courts over these high flying lawyers and the many other government officials and ex-Presidents who have been accused of taking millions from Oldebrecht and Petrobras over the past 10-15 years.

As usual, it will be hard to read and trust the press to get to the bottom of these messes.  They tend to be manipulated by all the powers that be, both within and without the country of Panama. Guilt or innocence will not be clearly determined for a very long time in our estimation.

These and many other issues are being addressed in  “The Truth about the Panama Papers”.