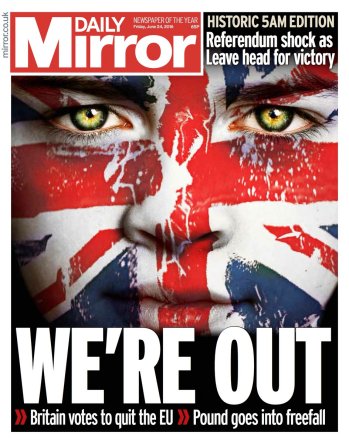 Even though by a narrow margin, a majority in Great Britain have overcome their leadership’s campaign of fear and manipulation in order to vote for standing up for their sovereignty and self-reliance.

While the world seems bent on following the neocons and socialists to some yet unseen utopia of global equality and “security”… the majority of free persons in the British Isles have seen fit to stand up to regional and global redistribution of wealth. They have re-taken their future livelihoods into their own hands instead of handing it over to global corporations and aristocracies who have long controlled this experiment of regional unification called the European Union.

We believe that the world best functions under a global “coopetition” economic model than giving into superpower politicos who want to control markets for securing the elites at the expense of the majority working men and women of the world.  Governments have never succeeded in taxing any country into wealth…and yet the mold persists in these empirical unions to regulate and tax the hordes with the obvious false promise of security and fair treatment in markets. We believe true capitalism has not existed in any major country including the USA for decades now.  We are hoping now that increased independence and freedom from obligations that were not their own will now help Britain better control and grow their economic…and yes, political…destiny.

Hopefully, this sets a new pattern of sovereign behavior for even small republics like Panama.  With all the pressures Panama has had to give up their sovereign data and financial controls via the Panama Papers fiasco, Brexit should serve as an example of “the people” rising up against their political leaders to say “no” to foreign powers instructing their leadership on what is legal or not legal behavior within their borders.

Our book and writings have been one of the few voices questioning the global bludgeoning of Panama’s sovereign reputation as a competitive and desirable country to live and do business in.  For media and politicos to be demanding access to stolen data and subverting foreigner’s trust placed in Panama is an ethical nightmare.  The blatant hypocrisy and tyrannical behaviors of the international community against Panama for simply being a low tax, private country where global companies and citizens can protect or invest their assets is of great concern to any liberty minded individual.

It is now time for citizens around the world to demand similar respect for their domestic sovereignty. The best place to do that is through political action and the voting booth.  The leadership of the world must change soon…or everyone’s liberty is potentially at stake.

These and many other issues are being addressed in  “The Truth about the Panama Papers”.